Please click on link below in brackets for full video start to finish or for segments within the contents, please click on any timed link for precise placement.
​
Where the YouTube link is in English, Urdu subtitles are often included and vice-versa.
June 3rd 2022: (Link to full MTA UK YouTube programme) 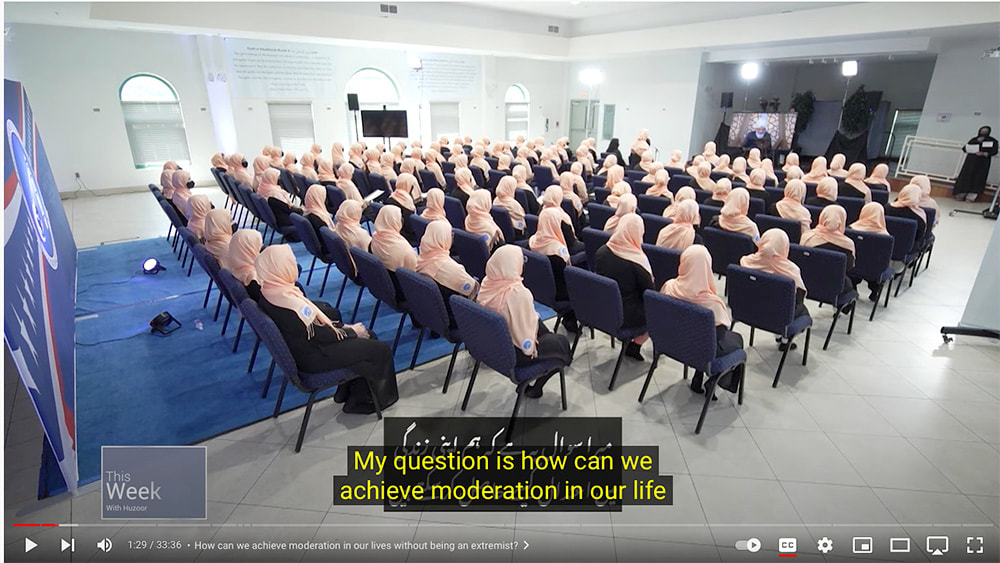 Virtual meetings with Waqfe Nau (28th May) and Waqfaat-e-Nau (29th May) from the USA.


(Questions asked during the above virtual mulaqat but not covered in the Youtube video appear in the Al-Hakam report and produced below. Readers are still encouraged to read the report on the Al-Hakam website as they publish more details than what we have presented here. (Direct link to the article is in the date header)

Al-Hakam – (held on 28th May – Lajna Waqfe Nau, USA) Huzoor (aba) said: “If they appoint you as the judge, then you must listen to them and wherever you see more weight in their arguments, you can decide in favour of that. But there should be a logic behind your decision and it should not be just for the sake of giving [a] decision, or taking the side of somebody who is close to you, you just give a decision, no. Allah Almighty says in the Holy Quran that you must show justice and stand against all evils and if you are asked to bear witness against yourself – if you have to stand against yourself or give witness against yourself, your parents, your kindred, your children, your siblings, then do it. So, if you are doing justice, then it is okay, no matter who the person is or the party is.”
​ Huzoor (aba) said: “If you are a true Muslim, if you believe in one God, if you are reading the Holy Quran and you know the teachings contained in the Holy Qur'an, and if you know the spirit of the bai‘at, and if you are following the teachings or guidance given to you by the Khalifa of the time, you will not face such types of difficulties.

“The thing is that we should not only claim that we are Muslims, we should [also] try to find out what commandments are given in the Holy Qur'an by Allah the Almighty, what are the teachings of Islam; and if that is the case, then we shall reform our environment, our surroundings, not that they influence us. And pray to Allah the Almighty as well that Allah the Almighty may always guide you on the right path”.

Huzoor (aba) explained: “That is their belief because they think their prayers are being answered by Jesus Christ […] Even Hindus believe in different deities, and they say that ‘our prayers are accepted by our deities.’ During the time when the Holy Prophet, peace and blessings of Allah be upon him, appeared and he asked the people to worship one God, the people of Mecca were idol worshippers and they used to believe that their deities were accepting their prayers and they were being answered.

“According to their belief, Jesus Christ is not the father, he is the son. When the father is there to accept our prayers, why should we go to the son for intercession or for anything? […]
“There is no logic behind their belief.” Huzoor (aba)  then encouraged her to read more literature of the Jama'at and in this way, she would learn more about this matter.
​
Hazrat Amirul Momineen (aba) said that when somebody’s difficulty was removed, it was only by the mercy of Allah and not because they prayed to their deities.

Huzoor (aba) smiled and said, “I think you are representing your Amir Sahib. […] at present I don’t have any plan to give you any virtual, online address. So, if possible, when I visit you [in America] then we shall see.”

Huzoor (aba) said: “You cannot force anybody that they should not ask unnecessary questions. If they are unnecessary, just avoid the person. This is what the Qur'an says:

عَنِ‭ ‬اللَّغْوِ‭ ‬مُعْرِضُوْنَ
“[That is] if you hear anything which is not appropriate [and is] unnecessary, then just leave it and leave the place. That is the only solution.”

“From the very first sound of the alarm, you should get up and sit on your bed; instead of stretching your body doing this and that and after that going to sleep again. So, this all depends on your willpower and determination and you should develop that habit.”

Huzoor (aba)  said: “The Holy Prophet, peace and blessings of Allah be upon him, says:

الحياء‭ ‬من‭ ‬الإيمان
“‘Modesty is part of your faith.’ If your dress is modest, and you are wearing the dress which can cover your body, bosom, face, and everything [that is required to be covered], you are observing all of the protocols of purdah, then you can do whatever you like.
​
“The Holy Qur'an gives the example of two women – two girls – whose father was old and they were waiting for their animals for them to drink water from the source – a well or whatever it was – and Moses (as) saw them and he helped them and he took their animal and they drank water and after that, the girls went home. And after some time, one of them came out again and asked Moses (as) that ‘my father is calling’ – and it is explained there [in the Holy Qur'an] – that she was very well composed and even shy and very modestly she asked Moses (as) that ‘my father is calling you’. So, that shows that women should always behave very modestly, their dress should also be modest, their speech should also be very well composed and when you are doing research or something like that, you can do that with the boys but only limit your talks to that subject, not that you get free and then mix-up in their parties and gatherings and go outside with them, no. As far as your work is concerned, you can work with them because that is part of your education, or if you are working and it is part of your job; but [do] not permit yourself to relax in such a way that all the limits of your modesty are broken. So, if you follow this protocol, then you will always be safe.”

Al-Hakam – (Held on 29th May– Waqfe Nau, USA) Huzoor (aba) smiled and said it was a “very difficult question.”

“Although it is your desire and wish that you should come here to get admission in Jamia Ahmadiyya UK […] we cannot take students from outside countries. When Britain was in the European Union, European students used to come here. But now they will also stop coming here, so it is very difficult for you.

“The only choice for you – if you want to live close to your parents – is Jamia Ahmadiyya Canada. If you want to go to some other place – far from your parents – then Jamia Ahmadiyya Ghana. That is also an international Jamia. Otherwise, there is no other choice. These are the two extreme ends – between these two ends there are Jamias, but unfortunately, you cannot get admission in them.”

June 10th 2022: (Link to full MTA UK YouTube programme)
Al-Hakam – (held on 5th May– Khuddam, Australia) Huzoor (aba) said: "When I decided to do waqf. As I have already explained in my previous  mulaqat with American Khuddam that my father and uncle were discussing that there were very few people in the family of the Promised Messiah, peace be upon him, who were waqif-e-zindagi. So, when I heard it, at that time, I decided that I would try to do waqf and for that, I prayed and Allah Almighty helped me. That was the moment, I can say, Allah Almighty accepted my prayer and despite the fact that I was not good in my studies, He made the circumstances in such a way that I was forced to do waqf and that was the life-changing moment in my life.”

Huzoor (aba) said that he could take a brochure or leaflet with the message and information of the Jama'at and “distribute it among people.”

​Huzoor (aba) explained that the Day of Judgment was a separate day, and the day of a person’s demise was separate. Huzoor (aba) asked Ahmad Nauman Sahib if he was able to read Urdu and then told him to read the answer to the second question addressed by the Promised Messiah (as) in The Philosophy of the Teachings of Islam. Huzoor (aba) said that after a person’s death, those who did good would enter Heaven and those who committed evil would be admitted into Hell. Then, Huzoor (aba) said on the Day of Judgment, all will be gathered and Allah will decide whom He will forgive and whom he will punish. 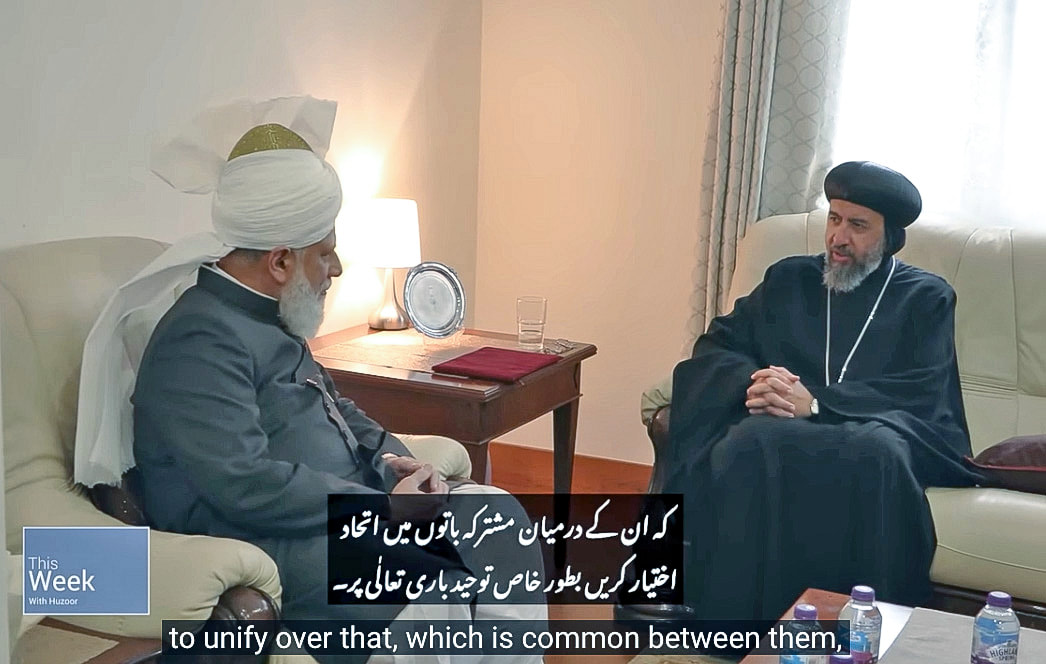 ​Al-Hakam – (held on 12th May – Khuddam, Australia) Huzoor (aba) answered: “With regards to their sentiments, you have to respect them”. This situation, Huzoor (aba) added, was to be carefully considered. “Since they […] had confined themselves in the interior of the country – inland – most of them are not living in the big towns and the cities.

“The Aborigines or the people living in the big cities and towns are members of the Parliament even. There are some [Aboriginal] people who work in government departments –  they also celebrate. So, they themselves are celebrating as well […] So you can ask such people, ‘What is the solution to this situation in your eyes.’”
​
Huzoor (aba) emphasised: “We should respect the sentiments and emotions of every people.”

“So, this is the duty of Khuddam-ul-Ahmadiyya to do permanent training and tarbiyat of their members, of the volunteers.”

Huzoor (aba) smiled and said, “You, yourself, should feel it. Have you ever experienced, when you are praying fervently, that you are crying in your sajda?” To this, Mohammad Abdul Salam Sahib replied in the affirmative.
​
Huzoor (aba) then said, “At that time, what are your feelings?” Mohammad Abdul Salam Sahib replied that he felt overcome with gratitude. Huzoor (aba) said, “You feel that ‘now I am very much close to Allah the Almighty’ and you feel sometimes that Allah Almighty is hearing all your prayers, that is the moment which should strengthen your faith.”

Huzoor (aba) explained: “It is not the matter of Khuddam-ul-Ahmadiyya only. From the very childhood, the parents should tell their children what are they, what is Ahmadiyyat, why we are Ahmadis, how we should behave, why we should pray to Allah Almighty, who is Allah Almighty, what is the Jama'at? What is the claim of the Promised Messiah (as)?, why did the Holy Prophet (sa) come to this world? And this is the basic teaching which has to be given by parents to their children.

“So, this is how they will keep themselves connected to the Jama'at, with Khuddam-ul-Ahmadiyya and auxiliary organisation”.
​
Huzoor (aba) added that there should be a close relationship between the organisation and its members. “You will have to save them by attaching them with you, and that can only be done if you make them realise that you are their true sympathisers and friends and brothers.”