www.thegreatrevival.co.uk/
A Ray of Hope in Challenging Times – The Caliph of the Ahmadiyya Muslim Community provides a comprehensive solution to the world’s problems. The book is a compilation of some of his addresses. CLICK HERE to order from the bookstore Waterstones.  FIVE STARS***** 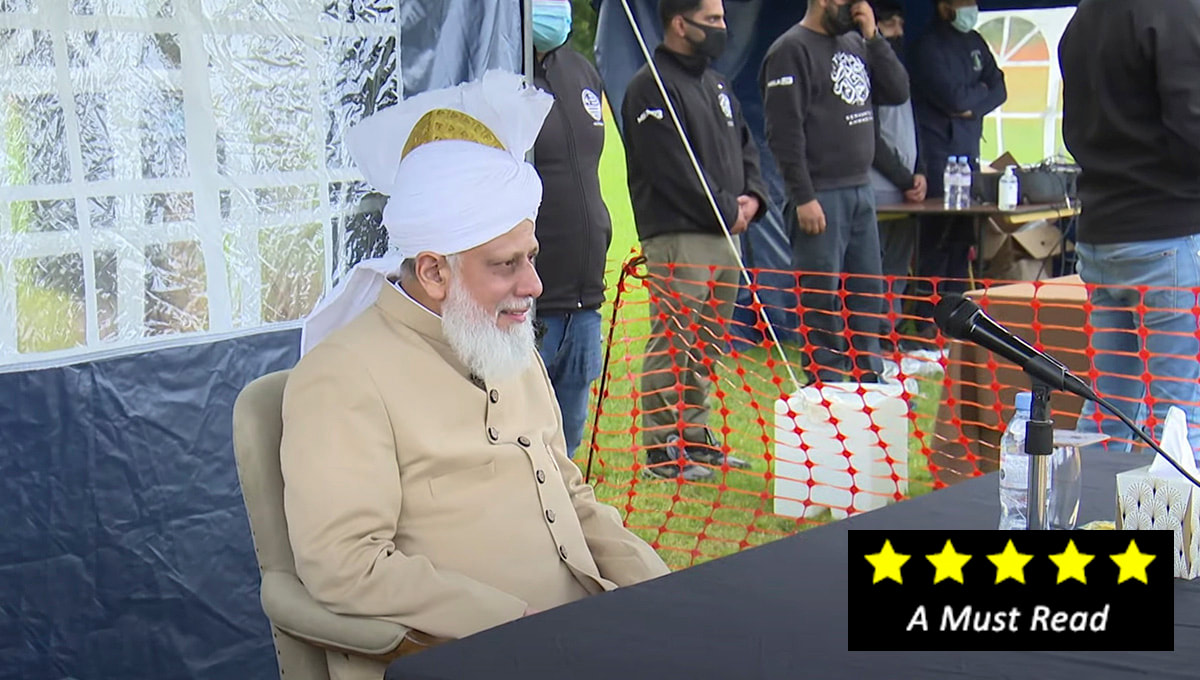 Hazrat Amirul Momineen Graces Khuddam UK 2021 Games
This was indeed a special event with the presence of Huzoor (aba) at the final session. Huzoor (aba) viewed various exhibition games such as a tug-of-war, cricket and slow bike race. (alhakam.org)

The Third Ashra of Ramadan. – Ten Days of Acquiring Salvation
In the last ten 10 days of Ramadan, some people get the opportunity to perform Itekaf spending these days in complete isolation and distancing themselves from worldly affairs and devoting their time entirely to prayer and in the remembrance of Allah. Quotes below of some who have performed Itekaf in previous years.
“I always wanted to experience myself how it felt and to experience the spiritual rejuvenation a lot of people had told me they had felt.”
“Now that I have sat Itekaf I now feel that I want to do it every year. “
“You reinvigorate your relationship with God.”
“At the end of it you feel spiritually cleansed, refreshed and find that there is an improvement of your daily worship afterwards, an indiscernible improvement in fact.”
(From www.alislam.org)

BEST HIGHLIGHTS UP TO WEEK ENDING 24 APRIL 2021
OUR CHOICE OF THE BEST 3 TWEETS OF THE WEEK: (Please RETWEET and/or LIKE these)
The institution of Khilafat (Calipate) acknowledged here – this tweet basically voices the sentiments of all Ahmadi Muslims around the world of the spiritual comfort guiding us of this Divine leadership. Few words said in this tweet which included the words: ”I took the pain like it was an honour”. For a better understanding of the sentiments mentioned in this tweet, please see Sermon of 2nd October 2015 titled ‘The Essence of Trials and Tribulations’ by His Holiness. Tweet with video showing food-packing action with Ahmadi Muslim youth. Whilst fasting themselves, they assist in the preparation of food distribution of 14,000 meals to the needy working with the Community Food bank of New Jersey.

A superb one-hour prgramme in Urdu on Islamic Jurisprudence with Q/A's from all over the world. A very brief English translation is presented with a gist of the answer. Best to view the original in Urdu and ask someone to translate the full answers. From the MTA International programme of Deeni-O-Fiqa'hi Masa'il - 21 April 2021.
DEENI-O-FIQA'HI MASA'IL programme – Just click on the time-segment to be directed to the exact point in the programme. The answers shown are written in GREEN here are very brief and more detailed in the programme but in the Urdu language.

17 APRIL 2021
OUR CHOICE OF THE BEST 3 TWEETS OF THE WEEK: (Please RETWEET and/or LIKE these)
A simple and fine acknowledgment of the Friday Sermon of 16 June part of which reads:  “… only Allah knows what is fruitful. Our faith should not rest on the conditionality of acceptance of prayers.” The young man is not a Muslim but on a voyage of discovery of Islam. So wonderful to read his comment about the writing of the Promised Messiah (peace be upon him). We all wish him well on his journey and may Allah be his guide. ​"Tomorrow is never promised” and indeed not even the next second and whilst we pray for betterment of our present and future condition, this tweet reminds us not to forget many aspects of the past to make us thankful for the present.

10 APRIL 2021
OUR CHOICE OF THE BEST 3 TWEETS OF THE WEEK: (Please RETWEET and/or LIKE these)
​FROM: @G_raphics • FROM: @theyoungimam • FROM: @SultanAChoudhr1

Drive Time Podcast (listen on SOUNDCLOUD app at 1:10:25secs) - EXAMS with Sitara Brooj Akbar who is a academic prodigy, multiple world record holder and gold medalist. She is a child prodigy who first came to the limelight for her eloquent speech and skilled oration to large crowds and on national television at the age of five. She went on the become the Youngest Non-Native Speaker to score 9 out of 9 bands in IELTS at age 15. Sitara Akbar hails from Rabwah, Pakistan. (VoiceofIslam.co.uk)

Editorial of new regular feature – What is the Existence Project? – A Vision of the Caliph Explained… (ReviewofReligions.org)

100 Years Ago – Tabligh in Portsmouth and visits of Ahmadi missionaries. (Alhakam.org)